With no small amount of glee do we bid July goodbye.  The theme of this most testing month was definitely “A LOT!”  July had a lot of everything: a lot of drought, then later a lot of disconcertingly heavy rain, a lot of weeds, a lot of vicious bugs, a lot of muggy heat, a lot of searing sunshine.  We put in a lot of hours, and in the end received a lot of delicious bounty from the land.  Hopefully, this has resulted in a lot of joy among all of you, the members!  We look forward to August, upon which we can pin many hopes, since it isn’t here yet.  We hope for a little less of the weather extremes we’ve been having (though the lightning storms are beautiful) to enable a bit of a more nurturing atmosphere for the plants, especially those out in the field, ripening away until their harvest in the fall.  We come out of July a little weary, but having learned more than we could have imagined!

This week, we continue the general trend of the July harvests, with a few new arrivals.  The tomatoes are keeping their volume steady right now, so your share of slicer heirlooms will be similar to the last two weeks.   Some of you might be wondering about peppers and eggplants.  We have been checking them each day, anxiously monitoring their development, and while the eggplants are finally fattening up and one variety of sweet pepper plants is loaded up with green fruits, other sweet peppers are taking their time.  Just today, I did a double-take after peeking under some leaves of a bull nose bell pepper plant and spying some tiny fruits emerging from their flowers.   We had hoped they would have been ready by now, but soon enough, you’ll have some peppers and eggplants on your tables. 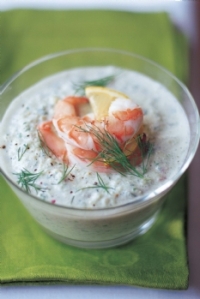 Thank you, Andy Chmar, for suggesting this recipe!

In a large mixing bowl, stir together the yogurt, half-and-half, cucumbers, red onion, scallions, salt and pepper.  Transfer the mixture in batches to the bowl of a food processor fitted with a metal blade.  Process until the cucumbers are coarsely pureed and then pour into another bowl.  Continue processing the soup until all of it is pureed.  Fold in the dill, cover with plastic wrap, and refrigerate for at least 2 hours, until very cold.  Just before serving, stir in the lemon juice.  Serve chilled, garnished with the lemon, dill and shrimp.

Add, cover and simmer until potatoes are tender, 15 minutes

Add and simmer for 5 minutes.  Remove soup from heat.  Puree with hand blender in pot or in small batches in regular blender or food processor.  Return soup to pot and place over low heat.

Add, if using, and heat through.  Add additional water or broth if thinner consistency is desired.  Adjust seasonings and serve.  Optional garnish: a swirl of plain yogurt and/or sprigs of fresh herbs, such as parsley, thyme, chives, or a celery leaf.

Quarter the leeks lengthwise, cut them crosswise into 1/4-inch slices and wash them well.  Finely chop the garlic cloves.  Melt the butter in a saute pan.  Add the leeks and garlic, stir to coat, then add the wine and cook over medium-low heat until the leeks are tender, about 10 minutes.   Season with salt and pepper and set aside while you cook the rice.

Have the stock simmering on the stove.  Melt the butter in a wide soup pot over medium heat.  Add the rice and cook, stirring, for 1 minute.  Pour in the wine and simmer until it is absorbed, then add 2 cups of the stock.  Simmer until it has been absorbed, then raise the heat to high and begin adding the stock 1/2 cup at a time.  Stir energetically and continue adding liquid after each addition is absorbed.  WWhen the rice is done, stir in the leeks, cream, cheese, and any more minced garlic.  Taste for salt, season with pepper, and serve.